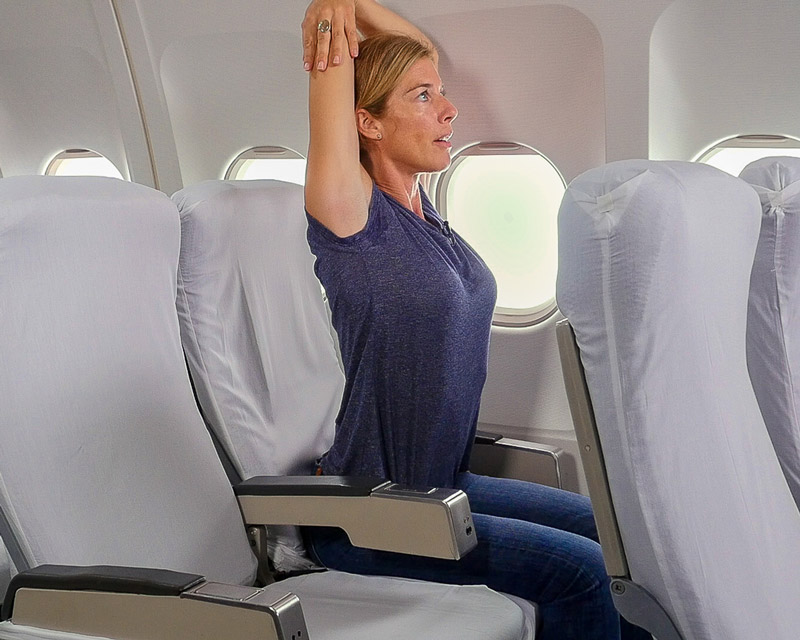 From Chicago to Portland, by Way of a Wicked Summer Storm

Last week I was on a very turbulent flight that nearly knocked us out of the sky. It was the kind of flight where the pilots offered frequent updates that walked the fine line between honest and reassuring, the flight attendants cracked weak jokes meant to put us at ease, and nearly everybody felt queasy, nervous, and afraid. As for me, I gripped the armrests til my hands hurt, moaned under my breath at each free-fall, and thought of the ones I love.

That is, until I remembered my feet.

At a certain point I realized that all of my attention was on the lurching and jerking, the moment-to-moment unpredictability, and my fear. What I was paying attention to was only amplifying my discomfort. But as soon as I realized where my attention was, I remembered that I had the option to pay attention to something else. And the choice I made was to feel my feet.

This had a calming, grounding, settling effect on me. As I felt the coolness in my toes and became aware of the fabric of my socks against my feet, my fear started to subside. Not immediately and not completely, mind you, but enough to make the flight more bearable, if not actually pleasant. And not because the flight stopped being scary, but because I shifted my attention from fear to curiosity.

As I reminded myself to feel my feet over and over, a conversation I had several years ago came to mind. At the time, I was working in a General Manager role inside a consulting firm. The firm had acquired the rights to a classic book that had gone out of print. Part of my job was to work with the author to re-publish the book.

Unfortunately the author, who was nearing the end of an illustrious but somewhat obscure career, epitomized the classic caricature of a grumpy old man. My suggestions, plans, and ideas were typically met with gruff and uncooperative responses. Profanity at top-volume was not uncommon. Needless to say, I had a really hard time working with this guy.

The conversation in question took place on a beautiful spring day. I was outside on my deck, speaking to him on the phone. Or rather, he was speaking to me, delivering a tirade of abuse and making a personal attack on my character for a minor glitch that I had actually played no part in.

Up until this point, I had always tried to soothe and appease him when he flew off the handle. I simply didn’t know another way. He scared me, and in my fear I shrank away from the conflict. But by now I had started studying embodied leadership, and I decided to put what I had learned to use.

Amidst his shouting, I felt my feet contacting the boards of the deck. I noticed the warmth of the sun on my skin. I felt all the churning in my stomach – anger about how off-base he was, and the fluttering in my chest – anxiety about what I was about to do. I felt all of this intense sensation, and then without shutting it down, I centered myself for my next move.

“Bob,” I said gently but firmly, “the way you are speaking to me right now does not make me want to partner with you. This book is your baby. We want to work with you to get it out there, and you and I need each other to make that happen. But if you can’t treat me with some basic respect then there’s no way we’re going to be successful doing that. We’ll both fail.”

That sounds simple enough, but at the time standing up for myself like this was both unfamiliar and scary. I don’t know what I thought would happen if I insisted on being treated with respect, but I certainly felt uncomfortable doing it! So imagine my utter shock and surprise when he timidly replied, “you’re right, I was out of line.”

From that point forward, things were different. He still was who he was, of course. All of his communication habits continued, but now I was in a position to call him on it. And when I did, he was responsive. Eventually we got the book published to everyone’s satisfaction.

Adjusting the Flight Plan As You Go: The Power of Presence

It’s important to note that nothing about this moment was planned. My words weren’t rehearsed. When I opened my mouth to speak, I had no idea what I was going to say.

Turbulent conversations are like this. There’s really no way to prepare for them. Instead you need to be able to engage with the moment in a very attentive and effective way. That means embodying certain skills – like centering yourself, or taking a stand for your own dignity, or making a clear request, or holding someone accountable – that are essential for building relationships and getting things done. Embodying those skills means you can naturally take the appropriate action in the moment, without having to think it through first.

I was able to make a more effective move in the conversation because I was more present to everything going on in that moment – the sound of Bob’s voice, the warmth of the sun, the feel of my feet on the floor. Sensations like these only happen in the present moment, so the more you pay attention to your sensations, the more present you’ll become. And the more present you are, the greater your capacity to respond freshly and appropriately in the moment.

There’s so much more to look at in this conversation: how to effectively take a stand for yourself; how to address someone with the level of power that matches their ability to hear and respond; how to find the words and speak them when in the past they’ve been stuck in your throat. All of these are good explorations for the future, and I’ll take them up in future posts.

For now, just consider this – how much do you feel your feet on a day-to-day basis? Check in with yourself a few times today. How might it help you to pay more attention to your sensations and get more present for turbulent conversations… or even pleasant ones? Experiment and let me know.

Amanda joins the Desk Yogi team with a degree from Stanford University and a career running the business education program at software giant Intuit. She studied and worked with luminaries and leaders in the sustainability movement long before sustainability became fashionable.